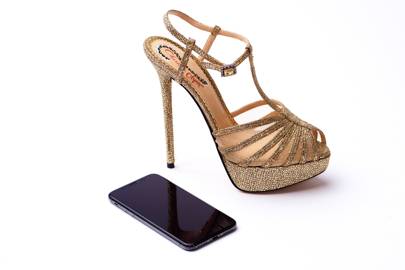 But her perrfect10 brass caged heel, designed exclusively for the 10 years anniversary of the brand. END_OF_DOCUMENT_TOKEN_TO_BE_REPLACED Black Girl First, which is the UK’s first ever festival celebrating black women and girls. Created by Paula Akpan, co-founder of the ‘I’m Tired Project’ and social media coordinator for gal-dem and Nicole Crentsil founder of ‘Unmasked Women’. I actually never heard of it, until a friend mentioned it to me and told me I should attend.

But by the time I surfed the net to find out more about it, all the tickets were sold out. So, of course, it made me curious. Eventually, I was able to pull a few strings here and attended as an assistant. (In Cece’s fashion…)

I usually go to these events with an open mind. I mean what’s the worst that can happen?

2- I attend, don’t like the atmosphere and vow to never return.

But in this instance, I arrive earlier as I had other events to attend. First; A launch party by Monroe&Turtle, then Amazon Fashion weekend in Central. As soon as I arrived in Shoreditch Town Hall where the festival was taking your place, I recognized so many familiar faces and the rest is (fun) history…

For the day, I wore this vintage skirt and shirt recently bought in a boutique in Notting Hill Gate. A Loewe belt and my all time favorite color blocked wedges. And people really liked it.

What do you think? And will you be attending any major festival soon? I am a colorful character you already know. From my room to my workspace, reflects everywhere .

Fluorescent and neon are this year’s big trends and It just continuously reinventing itself.
I am nowhere near a trend follower, but for this shoot, I teamed up with Ezinne who is currently one of the best choreographers in London.
Working with the likes of Tiwa Savage who recently won Best African Act at the MTV Awards singer of the year.
She has also worked with Davido, Drake and is former members of the CEO dancers. (if you remember them from Britain Got Talent) . I remember watching them dance for the first time at the BEEFTA Awards which was also the first ceremony of that kind I was attending. Way before my fashion days
( Ahhh… How time flies and changes!!)
And who knew that years later, our creative paths will cross.
So, both of us being East London girls. It only came naturally for us to shoot in East. Our makeup was done by Alicia, a makeup artist who was so attentive throughout the shoot. And shot by OJOMO Photography We were also published in ESIMBI MAGAZINE   for the Summer issue.

So, if you are feeling the trend, this is not the time to be shy. Go ahead and jump on the neon and let me know how that works for you. From African Fashion to …

WHAT SWIMWEAR ARE YOU?

3 Styles that will make …